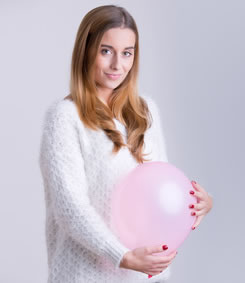 The first steps for a woman who is struggling to become pregnant are to find out when her fertile days are, and to detect and keep a daily journal of her basal temperature, i.e. her temperature as soon as she wakes up. Body temperature is modulated by progesterone, a hormone produced by the corpus luteum, and generally increases 0.2-0.5 °C during ovulation making the uterus more welcoming for the potential embryo.

However, basal temperature alone is not 100% reliable, because the increase may be affected by external factors such as stress, diet or sleep deprivation. Therefore, this has to be coupled with observation of cervical mucus which, when ovulating, becomes filamentous and transparent.

Besides these methods, the woman can also take a blood test to measure the main hormones involved in the regulation of ovulation, commonly called fertility hormones, for 100% certainty as to her fertile days.

PROGESTERONE: this is the main indicator that ovulation has occurred, and levels are evaluated during the second half of the menstrual cycle, as it is in this moment that the major quantity is produced, to prepare the uterus and breasts for a potential pregnancy. Levels during pregnancy increase even more, as it is produced by the placenta, its function being to prevent other ovulations taking place.

PROLACTIN: is a hormone secreted by the anterior pituitary gland and its function is to stimulate and maintain the flow of lactation. High levels may be the cause of amenorrhea, sterility and impotence. This measurement must not be taken immediately after a meal.

ESTRADIOL: this is the most important estrogenic hormone whose levels increase in the first phase of the menstrual cycle stimulating ovulation.

LUTEINIZING HORMONE (LH): is a hormone secreted by the anterior pituitary gland, which, in women, stimulates ovulation and the conversion of the ovarian follicle into corpus luteum, a structure that favours the implantation of the fertilized egg and the initial maintenance of the zygote.


FOLLICLE – STIMULATING HORMONE (FSH): this is a hormone produced in the middle of the menstrual cycle, by the anterior pituitary gland, which along with levels of LH, allows the diagnosis of amenorrhea, sterility or hypogonadism in women.

THYROID FUNCTION ANALYSIS: the thyroid is a small butterfly-shaped gland positioned at the base of the neck, which has the fundamental role of controlling the body’s metabolism through the production of thyroid hormones. Its malfunction may lead to a greater (hyperthyroidism) or minor (hypothyroidism) production of hormones. In both cases this might have repercussions on the fertility of both the man and woman.

It is therefore possible to adjust the dosage of thyroid hormones (FT3 and FT4) and the TSH hormone, produced by the pituitary gland which stimulates its production.
To detect an infection in the genital apparatus, it is possible, in a testing laboratory, to take a VAGINAL SWAB for analysis of common germs or specific ones such as candida, trichomonas, chlamydia or mycoplasmas. 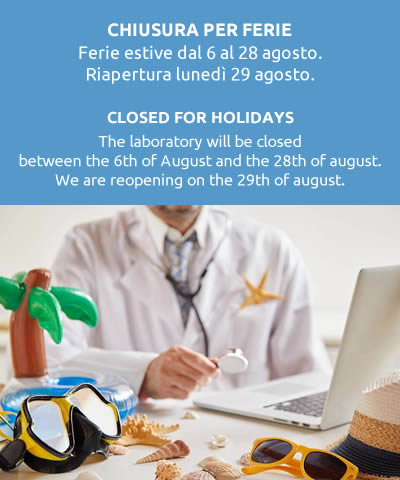